skip to main | skip to sidebar

I'm part of a team organizing Random Hacks of Kindness in Toronto. Technical people will spend their weekend hacking, programming, designing, etc. to solve the world's problems. We need sponsors to help cover the cost of food and prizes.

Please help us out if you can!

Posted by Brian Chick at 8:28 AM No comments:

The Problem: Comment threads are long, filled with trolls who spout slander and uninformed opinions, and the good comments and dialogue gets diluted in useless posts.

Require a login/password – by forcing a login process, you immediately increase the barrier for involvement. It's not a huge barrier, but it's enough to dissuade a lot of people who may otherwise leave less than thought-provoking comments. It also allows you to reward or discipline for good or negative comments, respectively.

Facilitate discussion – The problem with much online discussion is that people are free to comment on any aspect of a story, and there is nothing to organize whether you're talking about an issue, the personalities involved, the politics behind a decision, or something else entirely. When all of these discussions happen in the same comment thread, nothing is in place to keep any of of them on track to promote healthy discussion. The simplest method would be to build “Discussion Questions” into your article publishing process. If you had two or three questions leading to different forums the discussion would be more directed and focused to the topics specified. If there was a question like “Why is this a proposal a good or bad idea?” you'd get far fewer comments like “This guy is stupid.” In classic journalism terms, don't ask “yes or no” questions. Ask questions that require a more thoughtful explanation.

Make it a game/challenge – Like so many of the submissions, I believe that introducing a gaming or voting element inspires a desire to make quality arguments in your comment posts. Good posts get voted up, and bad posts get voted down. A good debate would have popular posts from both sides of an argument, without erupting into a flamewar. Awarding badges for quality posts, debate wins, and the like, would again, inspire people to post insightful and well written comments. Making the “debate” and the badges embeddable or shareable on Twitter, Facebook, and blog sites would allow your comments to be seen elsewhere AND invite more users into the conversation.
Posted by Brian Chick at 1:49 PM No comments:

There has been a lot of chatter lately about the "next big thing" in internet trends. Two of the biggest are the surge in mobile devices leading to GPS-driven apps and functions, and also a movement to introduce "gaming" into a lot of internet projects. Both of these themes appeared in many of the submissions in the Knight Mozilla Unlocking Video Challenge.

My own submission, for example, involved mapping crowdsourced video. Many of the other participants produced a similar plan involving geo-location. Considering the proliferation of GPS devices, especially in mobile phones, images and videos tagged with an exact location can easily be plotted on maps thanks to open APIs like Google Maps or OpenStreetMap. Using the crowd to collect images, and then sharing their specific location is a practice already in use, but will clearly be a staple in online journalism moving forward. Collecting and sorting this video is clearly the challenge.

Many of the projects also suggested gaming or badging. Adding a gaming element can be as simple as distributing points for a submission, awarding badges or making any sort of task into a competition. Foursquare is an example of an application that awards points and badges for location-based challenges. The more you check in, the more points you get, and the more badges you unlock. Like any game, whoever has the most points is the winner... or at least winning, as these games are often ongoing.

A lot of submissions thought that offering challenges (or assignments) and offering points or badges would inspire citizen journalists to submit their video to news sites. I can see this being an effective method to source content because it's essentially the model behind every thriving online community. Each online group has a higherarchy, whether its explicitly stated or not. Some might count your forum posts, or wiki edits, or the number of Twitter followers, but regardless of the kind of "points," people who are enthusiastic about participating in an online community always want more and therefore, particpate more. When online communities already function on an unwritten points system, creating a structured reward system just plays on a model that already exists.

These two trends come from very different places. GPS tracking for video is a technology that has become available to the masses in recent years in the latest mobile phones. Gaming just preys on the human desire to compete, collect, and win. One is a technological advancement, the other, a psychological factor that has influenced humans for millenia.

It is no shock to me that these two trends kept surfacing. I would have argued they're two of the driving forces behind the current generation of the internet, along with open technologies and mobile applications. I expect to see these themes pop up again and again in the rest of the challenges.
Posted by Brian Chick at 9:39 AM No comments: 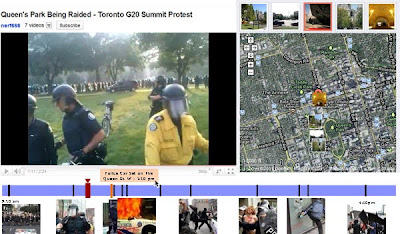 The Problem: These days, every mobile phone can shoot video. As journalists, it offers an opportunity to collect images from cameras belonging to an army of citizen shooters. The difficulty, however, is collecting and arranging this video, and more importantly, offering context and information about the video. More often than not, cellphone videos are left on the phone or laptop, or occasionally uploaded to YouTube. Only in the most outstanding cases does mobile video find its way into mainstream news.

The Opportunity: As mobile devices evolve, so does their camera technology. The iPhone4, for example, now shoots full HD video. Considering they sold 3 million of them in the first three weeks of availability, there are now millions of opportunities to collect footage of newsworthy events as they unfold. Considering the fact that even major news organizations can't be everywhere at once, taking advantage of these cameras and the "crowd" allows them to expand their coverage and show perspectives they otherwise wouldn't collect.

The Project: For major news events, we'll create an interface that invites users to upload their video, label it with appropriate tags, map the exact location where it was collected (many phones will geo-tag the video anyway), and place it on a map/timeline to display the sequence and location of each citizen video. For an event like the Olympics, your timeline may cover weeks. For a crisis unfolding unexpectedly, your timeline may only be a few minutes long. The location feature would also cover a broad range of focus. For some stories, your map may show a city block. For others it could display images from around the world, perhaps to show international responses to a particular incident.

Just as Wikipedia pages grow over the course of a few hours as new information becomes available, this interface would show the evolution of a news story as it unfolds using information collected from citizen cameras. Not only would the video be collected and categorized, it would also be mapped to give the viewers perspective. This functionality exists already in products like Panoramio but that is intended for geo-tagged photosharing. Taking the same idea and applying it to news would open the doors for citizen reporters to share their experiences, and introducing a timeline would allow the viewer to experience the stories in sequence.

As the timeline evolves, points could be marked to indicate happenings within the event. In the case of the G20 Protests in Toronto, you could have a city wide map with "Protesters gather - 9:15 am" and "Police car set on fire - 1:23 pm" marked as notable points. Video of the protests, the police presence, the car of fire, would all be plotted accordingly on the timeline, between those key points.

Why?: We already rely on crowdsourcing video (YouTube), news and opinions (Twitter/Blogs), and mapping (OpenStreetMap/Ushahidi). This project would combine those three things to offer a complete perspective of newsworthy events. It would engage citizen journalists AND provide a more comprehensive story when all is said and done.

Brian Chick
Toronto, Canada
brian.chick -at- left-button.com
Posted by Brian Chick at 9:59 AM No comments:

It should be noted...

This blog was originally intended to be a learning journal for the final stages of my Masters studies at the University of Alberta. I documented my thoughts and progress as I attempted to finish my final project which was intended to look at how age affected new technology acceptance at a major media outlet.

I did, in fact, finish the project and handed my final version in on September 11, 2009. I graduated in November.

This blog has been retired since, but I find myself returning to it more and more lately. I may continute to post from time to time, but the majority of my rambling can be found on a handful of other sites... like left-button.com and brianchick.com. Due to some life craziness, they're both sadly out of date, but they will both be kickstarted again soon.

Thanks for reading, and I hope you found something that scratched your brain.
Posted by Brian Chick at 1:21 PM No comments:

Sometime in the early evening on Wedneday night, I sent in the first draft of my Introduction, Literature Review, and Methodology sections. They add up to about 18 pages... I was aiming for 20, but I hate stretching things out for the sake of filling pages. I like to be succinct.

I also interviewed my boss, Dave Collier, who summed up a thought nicely by saying that this Net-Genertation is "conditioned for a constant evolution of technology." While I completely believe that, it's still a generalization, and perhaps, my research will prove that the generation you grew up in is NOT the primary factor in how you use computers...
Posted by Brian Chick at 5:39 AM No comments:

And the results are in...

After 10 days, 3 reminder emails, and a few calls to various colleagues for help, my survey closed with 142 responses, a number I'm quite pleased with. I started glancing at the data, comparing some numbers, and planning on which numbers my analysis will be based. I have a plan, and will institute it shortly, but first I'm trying to get some of my introduction and methodology sections done for the actual paper part.

It feels great to finally get moving on this after so many months of dreading it. Now I'm just itching to fight through it and get it done.

Of course, at the same time, everything else in my life has gotten super busy. So that's wonderful.
Posted by Brian Chick at 11:11 AM No comments: